The Gloop Pen is a special effect pen that produces expanding blobs of ink on the Canvas as you use it. Each stroke of the Gloop Pen expands wetly from the nib and ‘gloops’ in to itself as you draw, and there are settings that control exactly how it looks as it gloops. 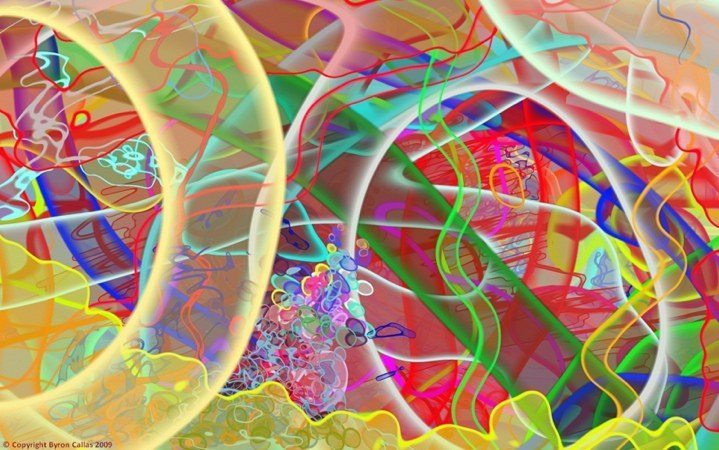 Because it is a special effect tool, there are many different uses for the Gloop Pen. You can use it for everything from painting thought bubbles and organic outlines to making clouds and leaky ink pens.

The Gloop Pen has the following features:

The Gloop Pen is special because the inside and edge area of its stroke can be independently controlled. As you draw, the settings you have applied to the inside and edge areas change the appearance of the stroke. If your settings create a very wide edge on the stroke you may not see the inside area until the area you have filled with ink is large enough.The Gloop Pen interacts with the texture of your Canvas, breaking up at the edges based on the roughness beneath.

The Gloop Pen looks great without any roughness at the edges too, try turning off the Canvas Texture for the Layer you are drawing on. See the section on Layers. Trying out Presets is a great way to explore the complex features of the Gloop Pen.

Opacity: Controls the overall opacity of the stroke as it is applied. Lower values produce more subtle tints on the Canvas.

Outer Blur, Edge Width, Inner Blur: These three settings control the appearance of the stroke at its edge. The Gloop Pen creates a stroke that has an inner fill and editable rim that expands to surround the area you draw.

Edge Width: This controls how thick the solid rim is as it forms around the stroke area. The higher this value the thicker the line produced around the edge of the stroke.

Fill Opacity: Controls the opacity of the ink that fills the area of the stroke. The higher this value the more opaque the ink becomes. If you set this value to 0% only the stroke rim will be visible as you draw.