The ArtRage for iPad 2.0 Update includes speed, styluses, and more!

We will soon be releasing a major update for the ArtRage for iPad app, which includes some major behind-the-scenes improvements to speed, stability and file handling, a complete redesign of the interface, and some neat new features like the ability to import and export individual layers, transparent PNG file support, the Gloop Pen and Glitter Tube tools from ArtRage 4, a wider range of colour pickers, palm rejection and vastly improved Stylus support.

The latest version still includes all the original natural media tools and digital painting features, so you’ll still be able to use all the same options after updating.

The update will be released after iOS 9 has been rolled out, once we’ve had a chance to test it on the latest operating system. iOS 9 will be released on September 16th, so we’ll be releasing ArtRage for iPad after that, as soon as we are confident that it will be fully compatible with iOS 9 and have fixed any issues introduced in the new iOS update.

The new update will be free to existing owners, and the price of the app will remain at US$4.99 from iTunes.

New Features in ArtRage for iPad 2.0 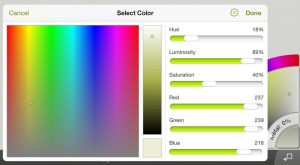 ArtRage for iPad 2.0 will have a full range of colour picker types (HL/S, HS/L, LS/H, RG/B, RB/G, and BG/R), as well as a Precise Color Picker to let you pick exactly the color you want. The color sampler will pop up a sample preview lens of the selected color, to make it easier to pick a hue from your painting, and we’ve added a shortcut that adds new colors to the Color Samples.

The update includes vastly improved performance, so your app should be faster and more stable. While performance will vary by device, we have seen marked improvements in memory intensive features like Watercolors and Transform.

The entire interface has been completely redesigned for better usability. Amongst other changes, the Presets menu can now be accessed through the Settings or the actual tool, Tracing and References have been combined into a single menu, and we’ve added a shortcut to add color samples under the color picker.

We’ve added a variety of advanced layer related features, including transparency lock, transparent PNG support for imported and exported files, the ability to import and export individual layers, Bump blend modes (paint texture effects), and the ability to copy and paste from the iOS clipboard.

The app now performs significantly faster, and is much more stable. It also includes a ‘save prompt’ feature to remind you to save your work.

The Canvas Settings page has been redesigned, along with the rest of the interface, and now includes default size presets and options for opacity and canvas patterns. You can also create and save your own custom canvas presets.

The app now has an improved gallery system with folders. You can group your paintings into custom folders and move them around easily between groups.

It also includes a backup system to allow you to backup your entire gallery to iTunes, and you can import from, or upload directly to, iTunes, Email, Photos, Dropbox, Adobe Creative Cloud, and deviantART Sta.sh, as well as export images directly to supported apps on your iPad (e.g. Twitter). You can also export all images or multiple Scripts from a group in a single action.

We have added improved performance and additional support for styluses and stylus features. Supported styluses include Adobe Ink, Adonit Jot Touch, Pogo Connect and the Wacom Intuos and Bamboo range. You can browse the latest supported styluses here.

The Pogo and Wacom styluses also include customisable button shortcuts to toggle the toolbar, undo, redo, or do nothing, as well as allowing you to turn touch rejection (stylus only mode) on or off.

Along with an online manual, we’ve added a handy guide to the a walkthrough guide to the app’s main features to help you figure out what everything does so you can start painting quickly and easily. You can check it out in the images below!

If you buy ArtRage for iPad now, you will be automatically updated to version 2.0 when we release the update (as long as you have iOS8 or later).