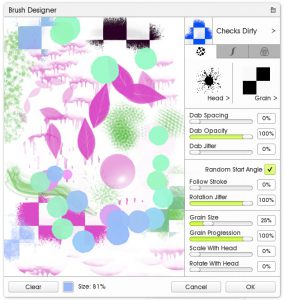 The Brush Designer is where you edit presets for the Custom Brush tool. It allows you to load any image as a head and a grain to create your brush and edit various properties.

The Head Settings tab is the first tab in the Brush Designer and the only one you need to use to set up a basic brush. Once you have adjusted the appearance of the size, rotation, and spacing of the head and grain, you can save it as a preset, or continue into the Stroke and Color Settings tabs to customize it further.

ArtRage 5 comes with some default head and grain shapes, and you can also import custom images.

The ‘Head’ is the shape of the brush itself. In most cases, a simple square or circle will work nicely, but you can use more complicated textures and shapes as well.

The ‘Grain’ is the pattern of the brush. It only appears inside the area of the brush head. It acts like a background pattern that you are uncovering with each stroke, or a stencil over the head of the brush, so if you never lift the brush and have the right settings, you can create a solid pattern with no edges.

ArtRage comes with default brush images that you can use for the head and grain. You can also import your own images.

You can easily invert your imported Head and Grain from the Brush Designer.

Once you have chosen your head and grain, you can edit the basic properties of the head.

Dab Spacing controls the distance between strokes. Set it at 0-5% for a solid line, or 80-100% for widely scattered dabs. (Note: Low Dab Spacing can be memory intensive. If you are seeing performance issues, try increasing it slightly)

Dab Opacity controls the maximum opacity of individual dabs. Opacity is controlled by pen pressure, and the dabs will overlap and build up into a solid stroke. To change the response pressure and maximum stroke opacity, go to the Stroke Settings and edit Minimum Opacity and Opacity.

Dab Jitter lets the dabs ‘jitter’ around the cursor instead of following in a single line. Adjust this setting to increase the randomness of the dabs.

Random Start Angle Toggling ‘Random Start Angle’ controls whether the very first dab is upright (the same orientation as the Head image) or randomly rotated. This effect is only visible if the head or grain show obvious rotation (and ‘Rotate With Head’ is active for the grain), so a circle will not show an effect.

Whether the rotation of the dab follows stroke direction or remains fixed. You can combine Follow Rotation with the other Rotation properties.

How much random rotation occurs around your cursor as you draw.

Grain Size Adjust the size of the grain itself, relative to the head. This will create different effects depending on the size of the head and the pattern of the grain. Most grains will become tiny dots under 10%, and be too large to see properly over 80%, so you will usually want to set the size between 20-40%.

Grain Progression affects whether the grain appears in exactly the same place relative to the head every time (0%) (“moves with the brush”, allowing you to draw a line, hair strands, or create a predictable ‘stamp’) or has a ‘fixed’ background position (100%), so it appears randomly within the head dabs (allowing you to create a fixed background effect or unpredictable individual brush dabs).

You can get very different effects depending on your grain size, rotation, grain and head.

Scale With Head allows the brush grain to automatically increase and decrease in size along with the brush head. 0% will keep the grain at a constant size, 100% will scale the grain proportionally to the head.

Rotate With Head allows the brush grain to rotate along with the brush head. Leaving it at 0% means that it will never change direction and ignore any rotation settings for the head. 100% will match head rotation exactly.