The Stroke Settings in the Custom Brush Designer 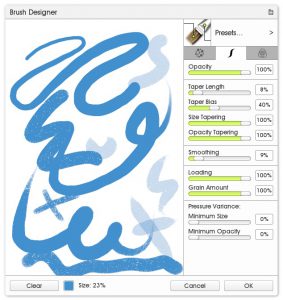 This section of the Brush Designer lets you control the stroke of your custom brush. The settings here affect overall appearance of line, and there are many properties that are very similar to the way the Ink Pen works (opacity, smoothing, taper).

The following settings are also accessible from the main Settings menu for the Custom Brush, so you can adjust them as you work without going into the Brush Designer.

Opacity controls how see through your strokes are.

The overall stroke opacity at the top is not the same thing as the dab opacity. The stroke Opacity limits the overall opacity within a stroke, which can otherwise vary widely depending on your other settings, or how often you go over the same area. Dab opacity just sets the base opacity for individual dabs.

For example, you could layer a series of low opacity dabs to build up to full opacity. Or you could limit the ‘full’ opacity using the stroke Opacity setting, keeping all the dabs at a lower opacity.

Taper and Smoothing are applied as ‘corrections’ after you make a stroke. They let you smooth and adjust your strokes to get the perfect line. Set them higher for very large or long strokes, and very low for detailed strokes where you need fine control.

Taper lets you set a drop off of size or opacity (or both) towards the end of your stroke. You can set one to 0% and use the other, or combine them. They will both use the exact same Taper Length and Bias.Length How much of the stroke is part of the taper effect (how steeply it drops off).

How much the individual dabs decrease in size.

How much the individual dabs in a stroke fade out to translucent.

Smoothing smooths out the entire line. Just like the Ink Pen, the setting you want will depend on the size of the brush and the size of your strokes.

Loading How fast your ‘paint’ runs out/fades to nothing.

How strongly the underlying canvas grain shows through. 0% will completely ignore any canvas grain. High dab or stroke Opacity will show less grain than lower opacity. The canvas grain effect will be visible even with canvas lighting off.

The size and the opacity of your strokes normally responds to pressure from your stylus. If you need a very controlled result that does not change in size or opacity very much, increase Minimum Size or Minimum Opacity to reduce the range of possible effects. To decrease the maximum size, just change the tool size.