Scott Waters is an iPad artist from the USA who paints textural oil portraits and impressionistic landscapes in ArtRage. 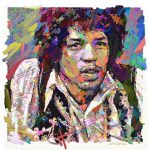 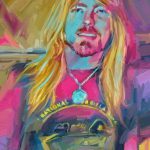 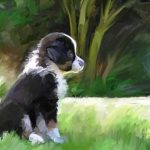 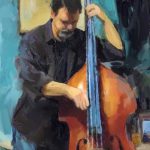 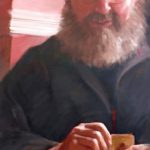 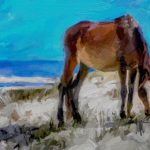 SCOTT Waters is a professional portrait and landscape painter, commercial artist, photographer and computer geek. After he suddenly began drawing at the age of eleven Scott was singled out for special training, learning watercolor in high school and received scholarships to study commercial art and illustration at Ringling School of Art in Sarasota Florida. He has freelanced and worked at various advertising agencies expanding his interests to include photography, copywriting, audio recording and digital computer art.

In 1983 Apple Computer dragged him away from the drawing board to work in public relations, marketing and events in the mainland and Hawaii and in Australia while kindling his interest in using computers for art.

He eventually escaped to Hawaii where the first exhibit of his paintings was shown at Maui’s Hui No’eau Visual Arts Center. The amazing light of the tropics brightened his pallet and the economy frustrated all attempts to make a living there as an artist.

After a painting sabbatical in Britain and classes in Ireland, Scott has relocated to St. Augustine to focus on art and music. His work has been shown at the Hui No’eau Visual Art Center on Maui, The Art Center in Richmond Virginia, Butterfield Garage Galleries, Tim’s Wine Market on Anastasia Island, The St. Johns County Building and under an umbrella off St. George Street in St. Augustine.

What kind of artist are you? What kind of subjects do you draw? (How would you describe your style and/or theme?)

How long has it been out? It seems that I’ve been using it forever.

I was once a rep for Apple’s software company Claris and may have found it through them.

My musician series – I just finished a portrait of Gregg Allman that’s getting a lot of attention. My Hendrix portrait is the most popular – it’s sold the most. I also did a series of local St. Augustine musicians and have shown and sold quite a few of those.

How do you choose what to draw?

Can I do something unique? Does it suit my techniques? Will it sell?

What are you trying to get across through your paintings?

BACK TO THE FUTURE

What have we been doing all this time? Musicians have electric guitars, amplifiers and digital studios that fit in their pockets. Craftsmen have power tools, chefs have food processors. Even gardeners have power mowers and weed eaters. But artists are expected to laboriously produce their “masterpieces”, one at a time, alone in a secluded garret. They then nail it to a wall and hope someone gives them money.

Recently, I participated in a plein-air painting event that involved carrying fifty pounds of paint, panels, brushes and incidental hardware across town to a spot where – fighting the wind – I set everything up, sketched the rough, then dug out my paints — only to find that one of my primary colors had dried hard as rock in the Florida heat.

So screw it! I hereby resign from antique media. It’s time to get back to the future. I’ve been an artist since I was eleven, it’s what I’m good at. From high school thorough art school, I studied, trained and practiced the craft of making good pictures, and quite often sold my work. But the top money in art goes to a just a tiny percentage of us. The rest are expected to be happy as “Starving Artists”.

Don’t get me wrong, making lots of money making pictures would be great. But sitting alone in a studio smearing paint on fabric doesn’t compare to the rush you get from playing guitar live in front of people, even when you’re not that good at playing guitar. Music is a huge, important industry. People want to have sex with musicians. People want to give them money, drugs, and fame. At least that’s what I’ve heard. Music is living, exciting, popular and reproducible. Art is moribund. Galleries are where art goes to die.

Sometime back in the last century, Apple Computer hired me as a regional marketing manager. It was a significant career move and an exciting upgrade for a struggling commercial artist and agency art director. I handled five states, and hundreds of dealers, schools, and businesses. The best part though – was the education – Apple’s training was decades ahead of what was then available from most colleges.

During the years I worked at Apple, I actually talked to Steve Jobs only once. It was at the 1983 sales conference in Hawaii after we first saw the Macintosh. He sat down next to me at breakfast one morning.

You should know that the last thing you ever wanted was for Steve to notice you. Depending on his mood, it could mean the end of your career. So after a moment of panic, I came up with the most important thing I could think to ask him;

“So when do I get a ball-point mouse?”
He took a bite of his croissant and said, “How about a graphics tablet with a pen?”
“That’ll do for now…” I replied. He smiled, picked up his stuff and went off to surf the other tables.

Well, it’s been over thirty years and Apple has finally came out with the Apple Pencil and iPad Pro. Thanks Steve, It’s about time!

My goal is to have the same power and flexibility as a painter that I do as a guitar player; I want the digital equivalent of a Fender Stratocaster, a Marshal stage stack and a rack of effects pedals. Jimi with the right electronics, he changed music forever. Someone once told me “You’re cheating – that’s just paint by numbers” I said “These are my numbers” then handed him the iPad saying; “Here you do it!” He shut up.

Finally, I’m 68 years old, I don’t have time to mess around with antique media and don’t need to prove that I can paint pretty trees. As Steve said: “A true artist ships!”

Because it’s an analog of analog media, but with undo, layers and easy color choice. It took me a couple of months to learn, so I did a painting every day until I had it figured out.

I use everything I can, starting from my own photos when possible. Then I run it through every app I can to get the composition and colors I want. Finally, I paint every square inch manually in ArtRage.

How would you normally paint a picture? What is your process?

See above. I spend days prepping a photo and then dive into it. My girlfriend has learned that I’m not available when I’m working on a painting.

Using colors from the reference picture – Undo and layers.

Editor’s Note: Glitter is actually great for adding texture or laying a subtle mix of colors down quickly as it acts like the oil paint when blended. Or for sparse dots, sea foam, or just having a lot of fun!

Learn to draw, study color theory and composition and never use black.

Save versions as you go and export them as .png files. You can delete the bad ones later.

Editor’s Note: Recording a script is also a good way to go back to earlier versions of a painting if you have the desktop edition of ArtRage (turn scripts on in the New Canvas screen in the iPad app). Just play it back until you reach the part you wanted, and undo if you accidentally overshoot, then work from there! The only downside is that you do need to move to the desktop, although you can import the PTG file back to the iPad later if you wish.

You can view more of Scott’s work and purchase it at Scott Water’s Art. Check out his blog and his Facebook page too!