Howard Barry, known as HBCreative around the web, is an American multimedia artist who creates powerful, colourful images exploring portraiture and culture. 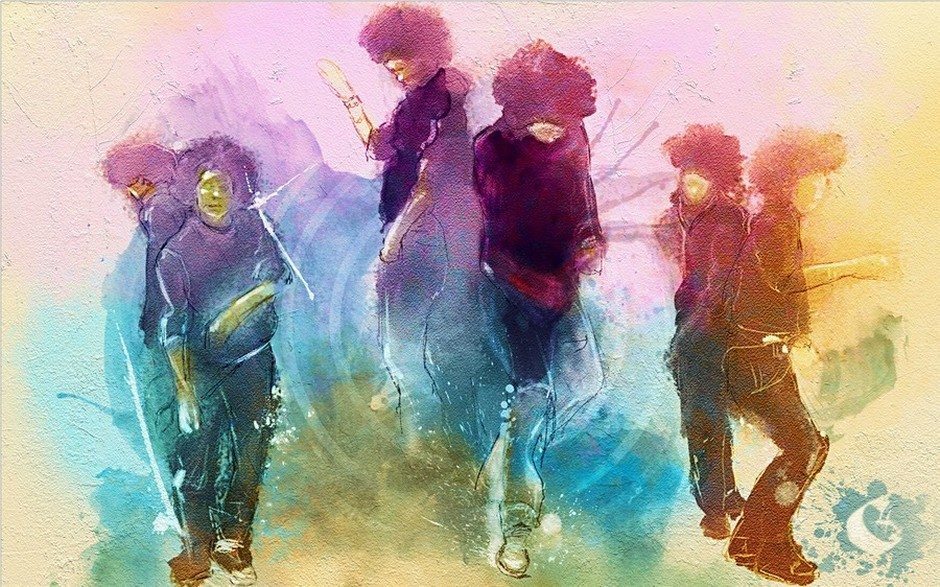 My name is Howard Barry, I’m a Graphic Designer, Illustrator & Fine Artist from St Louis, Missouri and I work under the name hbcreative. I’ve had a love for art and the creative process since I was a child; even mowing the lawn was a chance for me to create, as I would cut lines and decorative patterns in the grass.

As a child I had talent, drawing and painting came natural for me. As an adult I suffered a Traumatic Brain Injury and I thought my art days were over, but I managed to relearn a few things and with a lot of work and practice I’ve developed artistic skill. I have a degree in Graphic Communications/Graphic Design and ultimately hope to go as far as a Masters in Fine Art.

I’m currently using ArtRage 4 (I also have ArtRage Studio Pro running on a laptop, because I grew so accustomed to the interface that I didn’t want to say goodbye).

I mainly use ArtRage 4 on my Mac Pro with a Wacom Intuos 4 Medium Tablet and Grip Pen. When I’m out of the Studio I use my iPhone 6 with the ArtRage for iPhone app and a Pogo Stylus, so I can create anywhere, anytime. 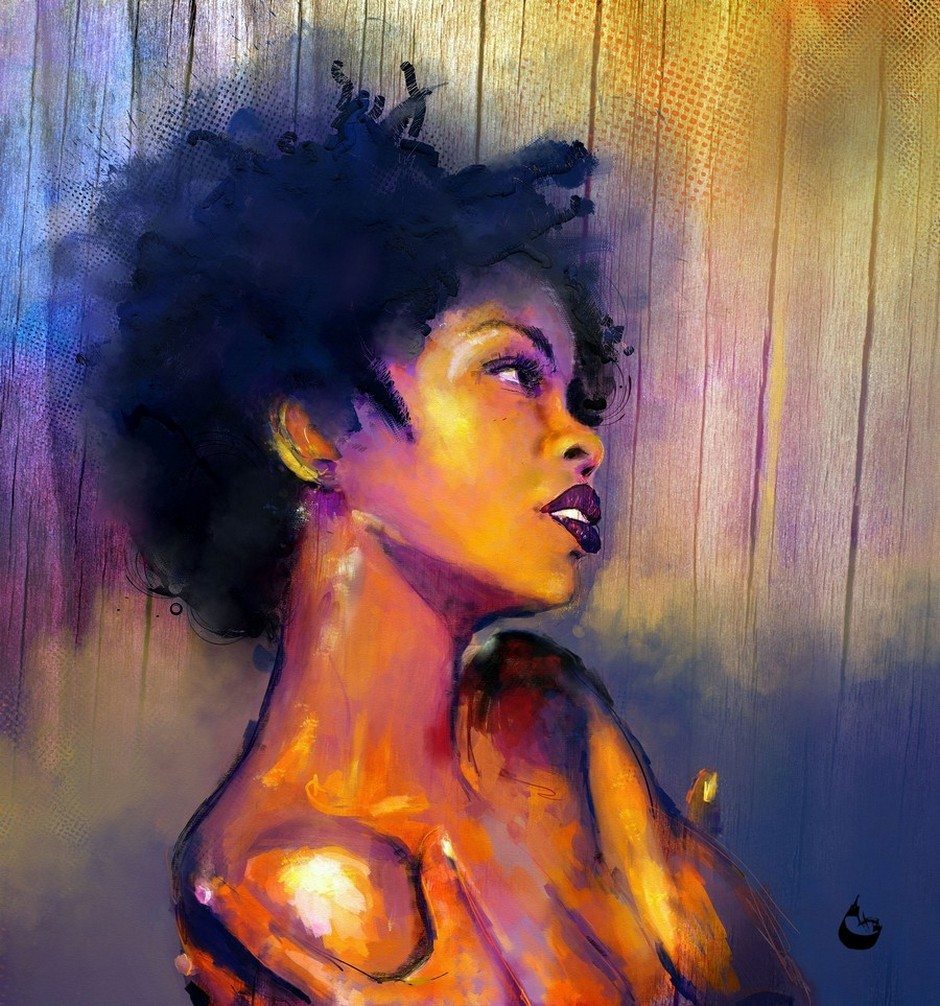 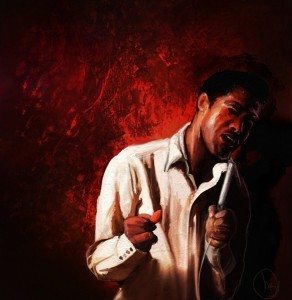 What kind of artist am I….hmmm I haven’t quite figured that out yet, I feel like I am still growing and in my experimental stage. That’s why I chose the name hbcreative (short for howard barry creative) versus hb-illustrator or hb-painter. I’m in love with the process of creating art and at any given time I’ll use any style, or any medium for that matter. If you traveled through my work online you would see everything from comics, portraiture, figurative and even some abstract art.

Lately I’ve gotten some attention for my Activism Art, so a lot of people think that’s all I do… but I’m all over the place. One moment I find myself drawn to realism and the next moment I’m quite the expressionist. That’s one of the perks of having a Brain injury, my brain is rapidly moving and coming up with all kinds of stuff, and I just try to keep up and bring some of it to life in my art.

I come from a traditional background. I took some art classes in High School along with Art History, but I am a Raging Tech Geek as well, so from the moment I discovered Digital Art, I have been looking for ways to mesh the two.

As I mentioned, I’m a Tech Geek, so yes, I do use other programs as well as traditional media. In addition to ArtRage, I have Adobe Creative Suite and the latest edition of Corel Painter, as well as a few lesser known programs, but ArtRage remains at the top of that list. I’m constantly finding ways to use all of them (including traditional mediums) together.

I’ve even gone as far as print my digital creations on sheets of dried acrylic paint. Quite often I work between multiple programs at the same time. For instance, I will paint and draw in Artrage, export the image and open it in Photoshop to utilize the text & path features, and return to ArtRage and finish the painting. ArtRage plays well with my other programs. 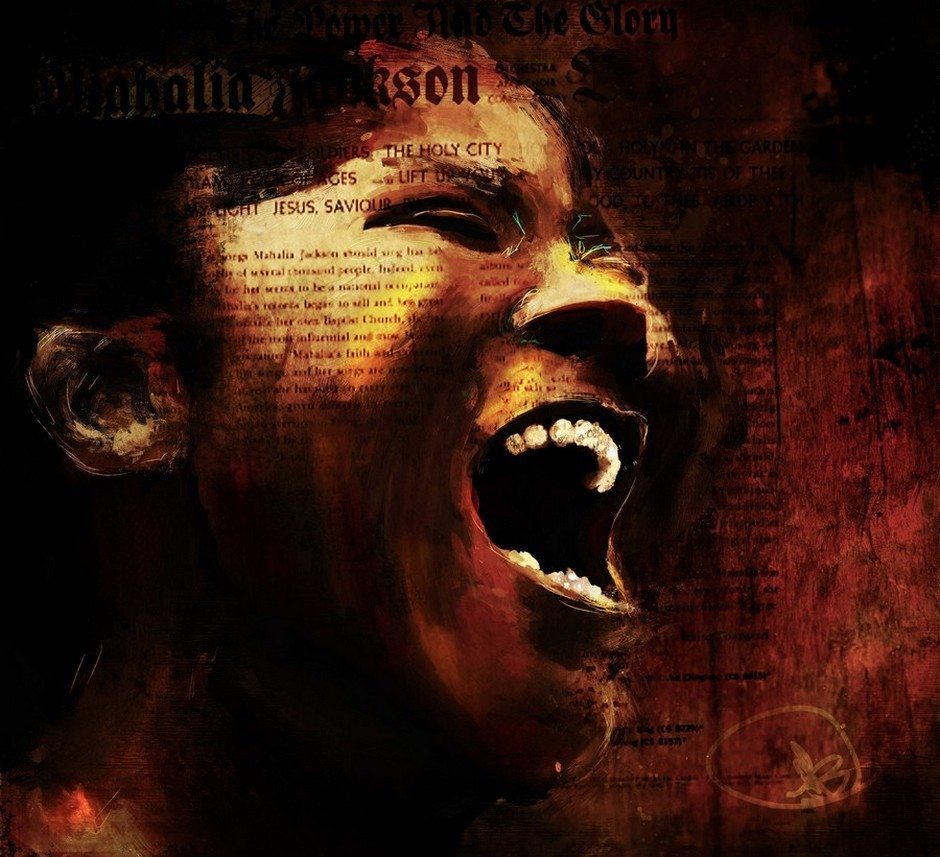 I think it was around 2008 that I began using ArtRage. I’m not sure, let’s just say a really long time.

I stumbled across a dusty box in the Clearance Bin at our local Target retail store, the price was marked down, I think it was around $19 dollars. I liked the art on the box, so I purchased it, but didn’t have high expectations. I was just going to let my children play with it. When I finally got around to installing the software, I was very surprised and impressed, and I’ve been using it ever since then.

It’s hard to choose, because even some of my larger traditional pieces are fleshed out or planned in ArtRage, but if I had to choose, I would say my “Shut Up and Dance” series. It’s an ongoing series of paintings where I’m more focused on trying to capture the energy and emotion of dance. Surprisingly, a lot of people like them, which might be due to the fact that several of them feature the popular dance duo known as “Les Twins”.

The simple answer is because I like it… I like how the Paint Tube mimics a real tube of paint. I like the way the paint responds to the Palette Knife, or how the dry clumpy brush gives me the same results as my traditional clumpy brushes. It’s as close as I’ve come to painting and drawing traditionally, without the need for cleanup up afterward. But even more than that, it’s the ability to experiment, play around with blending modes and work on multiple layers.

I love the interaction between the tools and the canvas, and that you can easily change the texture of the canvas (or each individual layer). Pressing the brush or palette knife into a glob of paint actually indents the paints and spreads it around very much like traditional media. I continually use it because, once I had a basic understanding of how it worked, I spent more time creating and less time fumbling around with the controls.

ArtRage has become as much a tool in my arsenal as my paints, pencils and markers. I have used it to plan out the composition of larger paintings. I use it in a lot of my mixed media pieces where I plan, draw and paint the beginning of the image and then print it out on watercolor paper or canvas and finish it with traditional media. For the times when I’m traveling or my health doesn’t allow me to visit the studio, I photograph and scan paint strokes, ink splats, watercolor drips, splatters e.t.c., and keep files of them that I use in a collage-like manner in ArtRage… and I’m still experimenting everyday looking for new things to do with ArtRage. 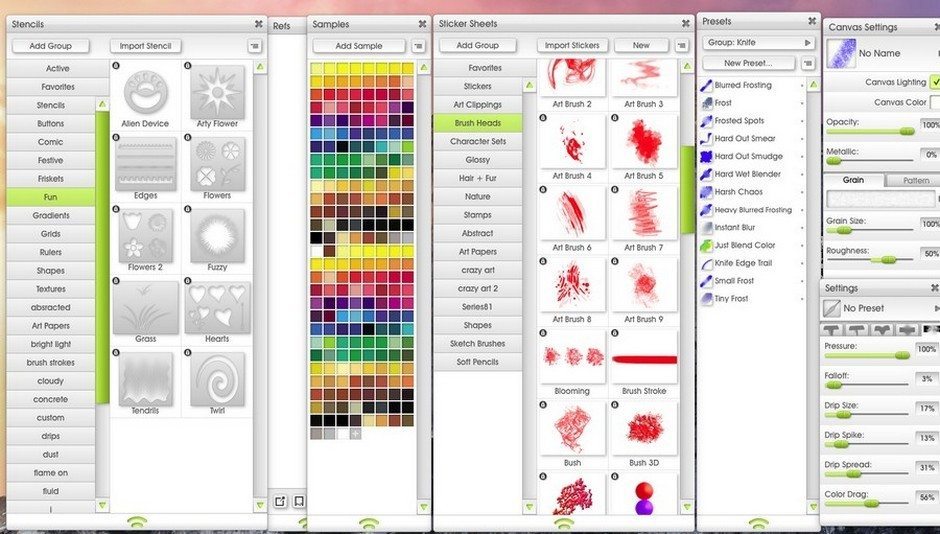 The top three are definitely:

1) The ability to adjust the settings on the tools. I’m heavy handed but I love that I can adjust the tools to match my drawing and painting style, as well as have different variations with distinctly different mark making abilities.

2) The ability to record & play scripts. I’ve recently begun to value this feature more as I’ve begun sharing over social media and giving people a tiny glimpse behind the scenes, but the playback has become even more valuable with helping me when it comes to reproductions or trying to see where I think a painting took a wrong turn.

3) Sticker Spray, which I didn’t touch for a long time because the name was deceiving. I love the sticker spray tool now that I’ve discovered its ability to use imported Photoshop brushes. I am also enjoying the Stencils features. I create stencils for elements that I might get tired of painting over and over, but I also use them for adding intricate details like texture to lace, or a pair of jeans. I must also mention the Navigation Wheel; I do a lot of zooming in and out and rotating the canvas, the Navigation Wheel makes it easy to do.

I guess the tool I use the least is the Glitter tool, but I do occasionally use it.

My tip would be have fun and experiment. By all means learn the basic fundamentals and study the Masters, but I’ve discovered that it is easier to learn and develop your skill when you’re less concerned about technical rules or what people will think of your work. Don’t make it any harder than it needs to be. I would also add continually work on your art. Studying other artists, and watching tutorials on YouTube is cool, but you are only going to get better by actually putting in the work, the more you do the better you’ll get. Mileage is everything!

I would say explore the software, I use a lot of the tools and still feel as if I haven’t scratched the surface. It’s very flexible; customize it and make it your own. 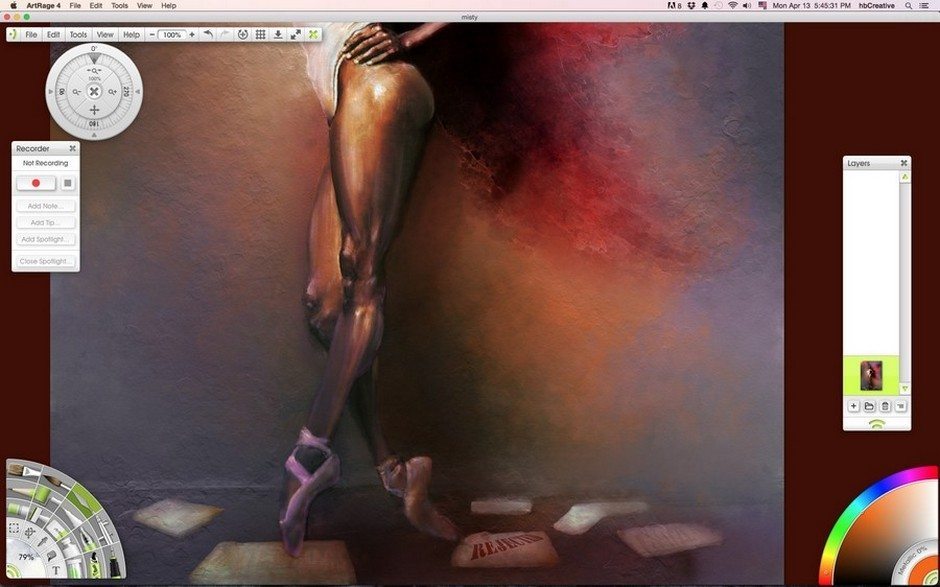 Definitely! When I first began freelancing, I planned and completed a lot of my work with ArtRage and would export it as .psd files, which I provided to my clients. These days, I use ArtRage professionally for various stages of completing commissions, and producing Gallery Quality Fine Art.

What feature (or improvement) would I like to see added to ArtRage?

I would love the addition of a built in Filter Gallery for basics like blurring and sharpening ect, I know you can import Filters but I’ve been too lazy to do that LOL!

(Editor’s note: we do have a built in Blur under Edit > Blur Layer in ArtRage 4. Learn more about it here: Image Adjustment & Filters).

You can view more of Howard Barry’s work and purchase it at howard-barry.artistwebsites.com.