Stencils are used to create precise shapes or lines on your Canvas. They work just like a piece of plastic or wood placed on the Canvas, allowing you to paint over them without the paint applying to the Canvas beneath, or draw around them to make outlines.

Stencils come in three different types which have different properties on your Canvas: Stencil, Ruler, and Guide. Stencils you place on the Canvas can be switched between these modes whenever you like.

Any Stencil can be turned in to a Ruler but only the default Ruler object has measurement marks along its length.

When your cursor approaches a ruler and ‘bumps’ against it, it will stick as if it was a pen against a physical ruler.

You can then draw roughly along the edge of the ruler and a straight line will be generated.

When you draw against a ruler your paint does not go underneath it.

Guide: Guides work exactly like Rulers but they do not prevent paint from being applied to the Canvas underneath them. This allows you to use a guide to precisely plot out the centre line of a stroke with paint applied on either side. Guides appear blue on the Canvas. 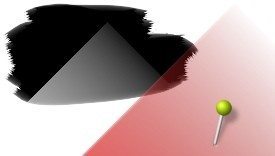 Loading a photograph as a stencil lets you lay down paint on top of it and see the image beneath when it is removed.

Clicking this pod opens the Stencils Panel. Clicking and holding it brings up a menu of available Stencils for easy selection, and other useful Stencil menu items.

A lock icon on a stencil indicates that it was installed by ArtRage and cannot be overwritten, you can still select it.

Right click an item in the panel to delete or rename it from inside the application.

The Active group contains a list of all the stencils you have currently placed on your Canvas. Each stencil is represented by a preview and when your point at it with your cursor two buttons fade in. The Eye button is used to show or hide the stencil, and the Menu Button provides options for that specific stencil on the Canvas.

If a stencil is hidden the Eye button remains visible when the cursor leaves the area of the preview.

The stencil preview indicates the rotation of the stencil and the current mode it is in through its color.

To use stencils you have to add them to your Canvas. Stencils are utilities like panels or References so they do not appear in the final printed picture or if you Export a copy of your painting, they sit on the Canvas and act as guides or masks and can be moved and deleted without damaging paint.

Adding and Removing Stencils on the Canvas

To add a stencil that is already in your collection to the Canvas you can either click its preview on the right of the panel or click and drag its preview. If you click and drag, the stencil will appear on the Canvas and you can position it before releasing the mouse button.

Stencils in the Active group cannot be clicked to add to the Canvas.

If you want to load a stencil from disk and place it directly on the Canvas without importing it to the stencil collection, use the menu button at the top right of the Stencils Panel and choose ‘Select Stencil From Disk…’. This allows you to load an image to use as a stencil, it can be done for Rulers and Guides too.

You can also add a stencil to the Canvas by selecting ‘New Stencil From Layer Contents’ from the Stencil Options Menu. This option creates a stencil that surrounds the contents of the current layer.

To remove a stencil from the Canvas right click it and select the remove option from the popup menu. You can also use the menu button for the stencil preview in the Active Stencil group of the Stencils Panel.

Once a stencil is on the Canvas you can position it freely. Because you may need to start a paint stroke on top of a stencil you can’t just click and drag them to move them. To move a stencil you should select the Transform Tool and click the stencil you want to move.

Stencils have a Pin that attaches them to the Canvas. The pin is also used as the point around which stencils will rotate and scale. To move the pin click and drag on the pin head.

You can also use the right click menu for the stencil on the Canvas, or the menu button for the stencil in the Active group of the Stencil Picker to flip the stencil, set its angle precisely, or invert it.

The Reset options in the stencil’s right click menu allow you to set the stencil to its actual 1:1 scale for pixel precision, and reset the pin to its default central position.

At the top of the Rulers group in the Stencil Panel is the straight line ruler. This ruler can be rotated and changed in length using the grips at either end. Click on the grip and drag it to the point you want the ruler to end.

The straight line ruler displays pixel dimensions for your painting and a print dimension value for your current units and Points Per Inch setting in the New File Dialog or Resize Panel. These can be adjusted from the right click menu on the Stencil.

You can stack stencils on top of each other for cumulative effect. This works for all modes of stencil so if you want to create complex ruler paths, just place rulers against each other and draw around them.

Adding Stencils to the Collection

When you select the Import button you are presented with a file dialog in which you can choose an image to import. The image you select is imported in to the current group. If there is already a stencil with the same name as the image you will be asked to change the name and try again.

Your Stencil Collection exists on disk as a series of folders representing groups and files representing stencils. You can access the folder in which all of your user stencils are contained using the ‘Open User Stencils Folder’ option in the Stencil Options Menu.

If you create a stencil using the ‘New Stencil From Layer Contents’ option in the Stencil Options Menu it will not appear in the collection. To add it to the collection right click the stencil on the Canvas or use the stencil’s menu button in the Active group and select Store Stencil In Collection.